Home > About Us > A Commitment to Growth from the Bresler Family

A Commitment to Growth from the Bresler Family

The Bresler family has a special relationship with Food & Friends. It began when Fleur and Charles’ late son Bill was a volunteer in the Food & Friends kitchen in the 90s, and later became a client before losing his battle to AIDS in 2001. Fleur and Bill’s sister Carol are now frequent kitchen volunteers. Additional members of the Bresler family are holiday volunteers and generous supporters. A Bresler family capital campaign gift in 2001 named the Executive Chef’s office in Bill’s memory. Now, we have yet another reason to celebrate the tremendous devotion of this family.

This spring, Food & Friends was thrilled to receive a $2 million gift commitment from Fleur, Sidney Bresler and Phyllis Bresler, and the Bresler Foundation, Inc. The gift was was announced at the 27th Annual Chef’s Best Dinner & Auction on June 19th, eliciting a long standing ovation from the crowd. The multi-year gift is the largest in the organization’s history and will allow Food & Friends to vigorously invest in the future growth of the organization, in the form of expanded nutrition services, and additional staffing.

In recognition of this transformational gift, Food & Friends’ state-of-the-art facility at 219 Riggs Road NE, DC will be named “The William P. Bresler Building” during a special ceremony in Fall 2017. 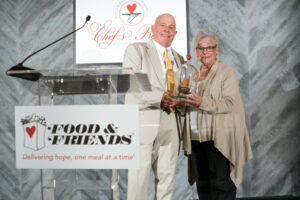 Food & Friends was proud to honor the entire Bresler family as the honoree of the 2017 Chef’s Best Dinner & Auction. Three generations of the Bresler family help fulfill Food & Friends’ mission through volunteering, board leadership, and philanthropy. Their individual and collective investments of time and resources touch the lives of thousands in our community, neighbors facing daunting illness, often with little or no support.

We thank the Bresler family from the bottom of our hearts, and invite everyone in the community to visit us at the soon-to-be named William P. Bresler Building