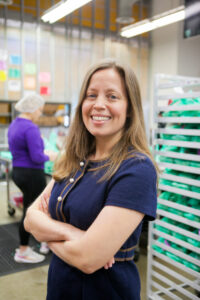 Carrie is a seasoned social services executive with expertise in programs, social services and fundraising. She earned her Master of Public Health degree at the Johns Hopkins University Bloomberg School of Public Health, where she focused on social and behavioral health. At Food & Friends, she has piloted health outcomes research to demonstrate the impact of medically-tailored meals on chronic illness management. She also led the first illness eligibility expansion at Food & Friends since 2000 to reach additional underserved populations.

Carrie has lent her public health and advocacy expertise to numerous local initiatives aimed at improving health and nutrition in the Washington, D.C. area. These include: Fair Food for All DC; the Mayor’s Council on Physical Activity, Health and Nutrition; the Senior Advisory Coalition’s Nutrition Subcommittee; the Ward 8 Health Council; and the national Food Is Medicine Coalition, where she sits on the advisory board.

Carrie resides in D.C. with her husband, Jonathan Christophel, who is a child therapist, and their cat. She is a 16 year resident of the District and is originally from Southeastern PA. Her current pastime outside of work is the Times crossword, which she tries to do every day.

Carrie can be contacted via email at cstoltzfus@foodandfriends.org or by calling (202) 269-2277.

Your support provides nutritious meals to those who are critically ill in the community. We make every dollar and volunteer hour count. Join our community!